Following a young man to be know as Eddie "The Eagle" Edwards, embark on a journey where the underdog can still be king.

An inspirational film based on the true story of Eddie “The Eagle” Edwards and his determination to compete in the 1988 Winter Olympic Games. Starring Taron Egerton (Kingsman: The Secret Service, Testament Of Youth) as Eddie “The Eagle” Edwards and Hugh Jackman (The Wolverine, Chappie) as Bronson Peary, his unlikely coach, this feel-good sporting drama takes you through highs and lows and the battle to reach out and achieve your dreams. 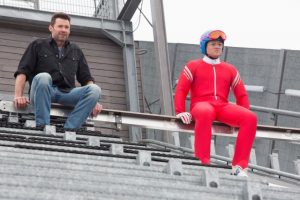 From an early age, Eddie Edwards decides he would like to be an Olympian. He was told as a young boy he should take up reading instead of following his sporting dreams as he suffered from bad knees, however, determined to prove people wrong and to fulfil his ambitions he tries many sports to find his forte, finally discovering he can ski. Battling Olympic committees whom do not believe he is good enough, he finds a way to compete in the 1988 Winter Olympic Games – as a ski-jumper. 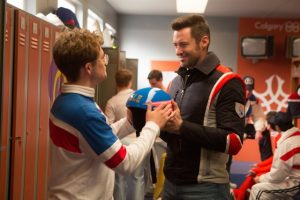 Eddies Mother, Jo Hartley (Prevenge, David Brent: Life On The Road), is very understanding offering support and encouragement however his father, Keith Allen (North v South, Hector), has concerns for his wellbeing and future career prospects and dissuades him from continuing down the line he is pursuing.

After travelling to Germany to learn how to ski-jump, Eddie soon realises he will need help to land a jump, let alone compete at an Olympic level. Working in a ski bar for Petra, Iris Berben (Rosa Roth, Miss Sixty), in exchange for accommodation, fate puts him in the presence of a washed up past ski-jumping Olympic champion Bronson Peary played by Hugh Jackman. Reluctantly, and after a lot of perseverance from Eddie, Bronson Peary agrees to help Eddie land the 70m jump in order to qualify at Olympic level and guides him forward, finding a way he can enter the 1988 Winter Olympic Games. 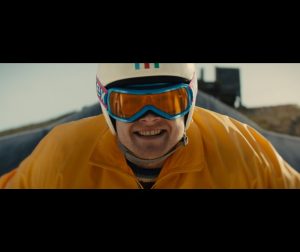 Similar to the 1993 sporting comedy Cool Runnings starring John Candy (and even a mention of the Jamaican bob-sleigh team from a loud speaker during the games), Eddie The Eagle follows both the competitor and coach as they battle to achieve their potential and show the world what they are really made of. 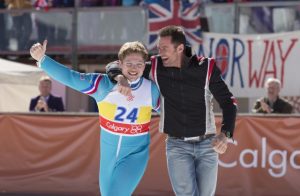 Props, scenery and wardrobe are in keeping with 1970s and 1980s and the cinematography shows how daunting the prospect of ski-jumping really is. Accompanied by a great soundtrack and script you genuinely feel emotional at points.

This light-hearted sporting comedy drama is thoroughly enjoyable and will leave you wanting to know more about the incredible man – Eddie “The Eagle” Edwards.