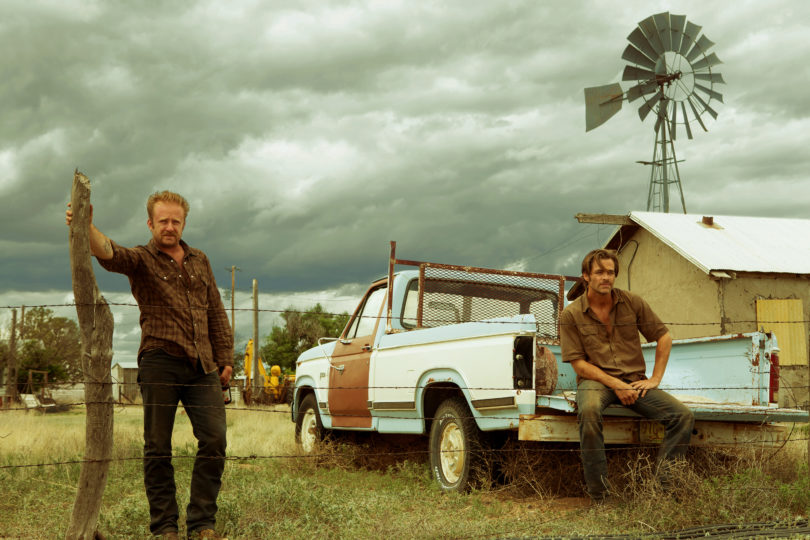 In epic modern Western Hell or High Water (out on digital download, Blu-ray and DVD now), brothers Toby (Chris Pine) and Tanner (Ben Foster) steal from the banks, sticking two fingers up at a society which hasn’t treated them well. In celebration of the Awards nominated film’s home entertainment release and in honour of the big screen rebels who just don’t give a f***, this feature takes a look at cinema’s greatest characters who have rebelled against the system.

The original and best, Robin Hood: Prince of Thieves is the big screen tale of the original gansta; Robin Hood (played by Kevin Costner), whose tale of stealing from the rich and giving to the poor is known the world over. Having been imprisoned in Jerusalem, Robin returns home to find his father dead, his home in ruins and the malicious Sheriff of Nottingham (played by the late Alan Rickman, who earned a Best Supporting Actor BAFTA for the role) terrorising the town. Joining forces with Little John and his band of outlaws, Robin leads the charge to defy the Sheriff and save the good people of Nottingham. The film proved to be the second highest grossing of that year and has stood the test of time to become a cult classic. The film also reached dizzying heights of notoriety due to its theme song, the Oscar nominated (and wedding favourite) ‘Everything I do, I do it for you’ by Bryan Adams. The song spent 16 consecutive weeks as the UK number one – one of the longest in chart history.

Catch Me If You Can serves a dual purpose on this list; showcasing a rebel of the highest order who merrily exploits the system, and offering a chance to watch vintage Leo at his scene-stealing best. The film is based on the true story of Frank Abagnale Jr (played by DiCaprio), a teenage criminal who conned millions of dollars out of various US companies before the age of 19; posing as a Pan Am pilot, doctor and parish prosecutor on his path to banking obscene amounts of cash. In fact, the real life Abagnale Jr. proved so good at defrauding the system that following his capture and punishment, the FBI turned to him to help them catch similar menaces to society. The film earned plaudits with both audiences and the industry, earning supporting actor Christopher Walken a BAFTA win and Oscar nomination in the process.

A classic good versus evil story in an atypical setting, V for Vendetta is a dystopian thriller with heavy political undertones. Although released over 10 years ago, the film provides an unsettling allegory for government oppression – and interestingly, is set in 2020 where – amongst other locations – the US system has broken down. Stepping away from the political implications, the film features an iconic central character; V (played by Hugo Weaving), whose first job as no. 1 vigilante is to rescue Evey Hammond (Natalie Portman), an employee of the state run British Television Network, from her oppressors. V goes on to become a figurehead for the oppressed, distributing Guy Fawkes masks and setting a plot to blow up Parliament into motion. The impact of V’s character has extended beyond the film, with the stylised Guy Fawkes mask (created by illustrator David Lloyd) becoming a symbol of wider protest; being used in recent times by the online ‘hacktivist’ group, Anonymous.

Earning a place on this list if not for quality but for ultimate rebel points is 2011’s Tower Heist. With shades of Robin Hood, the central characters unite to steal back money that their boss took from them. The plot follows Josh Kovaks (Ben Stiller), Charlie Gibbs (Casey Affleck) and Enrique Dev’reaux (Michael Peňa), employees of an exclusive apartment building who lose their pensions at the hands of a rich businessman owner. Together with criminal Slide (Eddie Murphy) and others, this motley band of renegades plots to break into the businessman’s apartment to steal back their hard-earned cash, whilst trying to avoid the FBI.

On first glance it’s hard to see how a group of illusionists can be classed as ‘rebels’, but J. Daniel Atlas (played by Jesse Eisenberg) and his accomplices are not any ordinary magicians… Atlas and his fellow illusionists’ performance steal the show in more ways than one, as the quartet performs bank heists during their performances and showers their audiences with the stolen money. Another classic Robin Hood-esque plot, were it not for shrewd FBI agent Dylan Rhodes (Mark Ruffalo) and Interpol agent Alma Dray (Mélanie Laurent); a pair the ‘Prince of Thieves’ certainly didn’t have to contend with. Starring Isla Fisher, Dave Franco and Woody Harrelson as the remaining three members of the Four Horsemen, Now You See Me is a modern take on the classic rebellion stereotype, offering four slick professionals whose act is well rehearsed and even better executed – role models to wannabe rebels everywhere.

It is no secret that The Hunger Games heroine, Katniss Everdeen (played by Jennifer Lawrence) has become a silver screen symbol of bravery and fighting for what is morally right, rather than the boundaries dictated by the world she lives in. Katniss begins The Hunger Games quadruplet of films as an innocent bystander, swept up in the ramifications of an unfair world. However as the narrative develops, Katniss’ moral compass pulls ever harder; and by the third instalment, The Hunger Games – Mockingjay Part 1, Katniss has become the face of the revolution. Not only does Jennifer Lawrence’s Katniss prove a defiant and determined leader of her world, the character has had wider implications of providing a strong female role model to a generation of girls; encouraging them to use their own minds and not follow the crowd.

Keeping It In The Family
9th January 2017