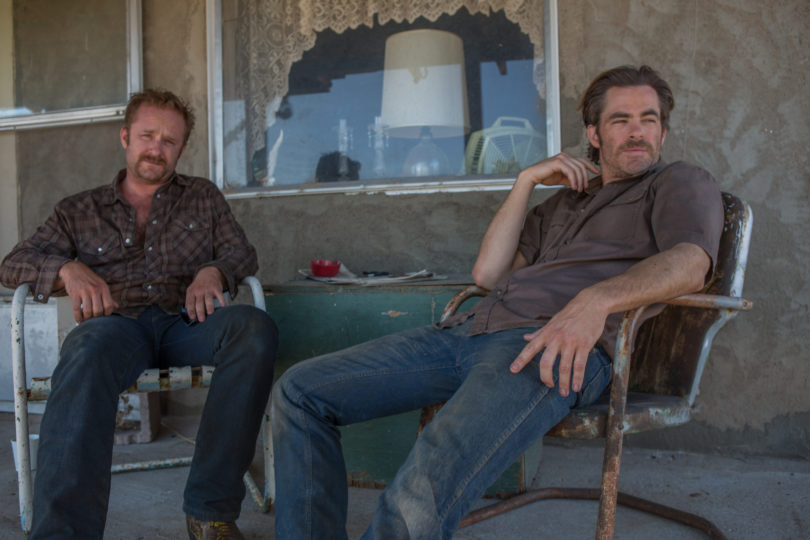 Hell or High Water, available to on Blu-ray, DVD and digital download now, is one of the essential films of the year. A morality tale that also manages to question the virtue of that morality in the face of rampant unfairness, David MacKenzie’s modern ode to old school Westerns is impossible to ignore and, once seen, harder to forget. That’s thanks in no small part to the laconic charm of the legendary Jeff Bridges (starring here as the Sheriff and ostensible ‘hero’ of the piece) but it is two incendiary performances from Chris Pine and Ben Foster as the brothers on a crime spree (to settle their mother’s mortgage) that help Hell or High Water really stick in the mind. The pair might have more altruistic reasons for their crimes but they’re no less watchable for that, placing their criminal relationship in some admirable celluloid company:

The Howard boys would probably consider themselves altruistic before they labelled themselves criminals but the fact remains that walking into a series of banks with sawn-off shotguns will earn you the attention of the local police – even if those you’re robbing have a certain sympathy for you and your motives (the Howards are trying to prevent a Texan banking chain from foreclosing on their mother’s farm by robbing the amount they’re short from said banking chain). Toby (Chris Pine) is the more measured of the two brothers, which is saying little when you look at Tanner (Ben Foster) and his collection of ticks, twitches and trigger urges, but we won’t spoil things for those yet to enjoy one the films of 2016 by indicating how things go for these self-styled Robin Hoods.

The infamous Jesse James: 19th century Missouri outlaw, guerrilla, gang leader, bank robber, train robber, murderer and younger brother to Frank James, the other half of the James Gang. Jesse took the lead in the gang, just as he did in Ron Hanson’s 1983 novel The Assassination of Jesse James by the Coward Robert Ford which chronicled the life and death of the iconic outlaw and was adapted for film in 2007 with Brad Pitt as Jesse, Sam Shepard as Frank and Casey Affleck as Robert Ford. Set in 1881, Robert Ford, a younger member of the notorious James gang becomes so inextricably drawn to and frightened of his mentor that his own delusions of grandeur force him to consider doing the unthinkable.

It says something about the regulars at New Mexican dive bar (the delightfully named Titty Twister) that Seth and Richard Gecko (George Clooney and Quentin Tarantino respectively) are the heroes of the piece. Misogynistic, brutal, not to mention on the run from a hoard of policemen keen to discuss a string of violent robberies, the brothers hole up in the bar but soon find themselves on the receiving end of some unwanted advances from a nest of particularly thirsty vampires. Seth (Clooney proving that even he can’t pull off a neck tattoo) even flirts with some morals as he opts to help safe Harvey Keitel and Juliette Lewis’ born again Christians live to pray another day!

Mrs Gruber clearly didn’t ever sit down with her two sons and have the chat about not pursuing a life of crime. Nor did Simon Gruber have the good sense to sit down and study the steps that led to his brother’s demise in Die Hard before deciding to try and rob Wall Street in the third film in the series (whilst also elaborately trying to get revenge against Bruce Willis’ John McLane at the same time. Still, none of this really matters considering that Hans Gruber is one if cinema’s great villains (thanks to Alan Rickman’s iconic performance) and Jeremy Irons’ sibling is one of the campest, with both leaving tooth marks in all of the scenery. The equivalent of two of Britain’s finest actors hamming it up in panto and all the better for it.

The life, times and atrocities of the ruthless east end twins have been portrayed countless times on the big and small screen. Ronnie and Reggie Kray and their gang, The Firm, were infamous for their brutality in armed robberies, murders, protection rackets and domination of organised crime in the east end of London beginning in the late 1950s. By the late 1960s they had become bonafide celebrities and were even interviewed on national television before they were finally arrested and convicted in 1969 by Scotland Yard, and are now cemented in the annals of London pop culture. The story of the rise and fall of London’s most notorious gangsters was seen most recently in 2016’s Legend, in which Tom Hardy gave an impressive performance as both Krays. A classic crime thriller taking us into the secret history of the 1960s and the extraordinary events that secured the infamy of the Kray Twins.

The family that dines together stays together? When a bunch of pretty hateful teenagers descend onto a dilapidated farmhouse asking for help with their broken down van, the last thing they expect is to be served up as a Sunday roast but Leatherface (loosely based on infamous real-life serial killer Ed Gein, who took the faces off his victims and wore them himself) and his clan of walking advice against inbreeding have different ideas. This being the late 1970s and with horror-meister Tobe Hooper in charge, what follows is an equal opportunities slice and dice as all of the cast – including a disabled teen in a wheelchair – meet unflinchingly grisly ends.

Last but by no means least, the most infamous filmic Italian-American family dynasty of all time, the Corleones. The epic Godfather saga follows a 1940s New York mafia family and their struggle to protect their empire from rival families as the leadership switches from the father, Don (Marlon Brando), to his youngest son Michael (Al Pacino) with the help of his brothers Sonny (James Caan) and Fredo (John Cazale). Just like his father, youngest of the brothers Michael is cool, calm and ruthless, particularly opposite the volatile and confrontational eldest Sonny, whereas the middle brother Fredo is somewhat of a liability. Despite their differences in personality, all three of the Corleone brothers place huge significance on the value of family, and that is the bedrock of the dynasty’s success.